After a good night’s sleep, they were fine beds, to breakfast. The capacity of the breakfast room left a lot to be desired. In other things, this one was just too small. Had a good breakfast, there was plenty of stuff and it was continuously replenished. They had all the ingredients for a good English breakfast. Scrambled eggs, sausages, hash browns, mushrooms and tomatoes. Very tasty and a good hearty breakfast for a good start to the day.

It was a beautiful day, cloudy and sunny. It’s cold, but you can dress up for that. 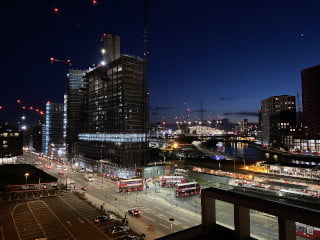 My parents had a magnificent view of the O2 Arena and the Emirates Airline from their room.

So we thought it would be nice to go with the Emirates Air Line. This is a cable car that runs over the Thames towards North Greenwich and of course also the other way. You have a magnificent view of the Docklands on one side and Maritime Greenwich and the Thames Barrier on the other. You can simply use your Oyster card or Contactless card to make the crossing. We used our Vistor Oyster card and this cost £3.50. This is the cheapest option. You can also buy single tickets, but these are a little more expensive. The
Emirates Airline
is just a 5-minute walk from the Royal Victoria DLR station, one stop away from Canning Town. 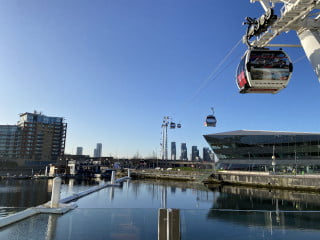 Walked from the
Emirates Air Line
towards North Greenwich.

It’s changed so much since I was last here. Then it was a big open plain. Now almost this whole area is crammed with modern buildings. You pass the O2 Arena, which of course was already there, which you can climb through
Up At The O2
. There are several shops and restaurants in the area.

We continued our journey through the Jubilee Line in the underground. You can also take the Thames Clipper Riverbus. North Greenwich pier is also within walking distance and you can see it from the cable car.

Back in Canning Town we switched to the DLR towards Tower Gateway. The advantage of the DLR above the underground is that you have a nice view of the Doclands. The DLR runs largely above ground. 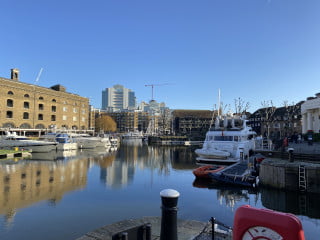 From Tower Gateway to St. Katherine’s Dock Run. This is a beautiful marina with very nice expensive ships. Also located here is the Dickens Inn, whose story goes that Charles Dickens came here regularly. About her lock, what St. Katherine’s Dock save the tidal influences of the Thames, walked towards Tower Bridge

and the Tower of London.

We walked across a small street food market at the foot of
Tower Bridge,
where the unseated smelled yummy. But we just had a hearty breakfast behind the molars, so skipped this just for a while. I always like to walk around the tower of London.

It is a beautiful place, where you have many historical sites together. You can also watch people. I have seen most of the sights several times from the inside in previous visits. 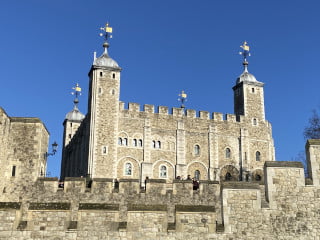 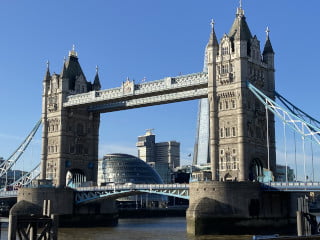 The intention was to go from the Tower of London

with the Heritage Routemaster 15.

But it didn’t drive, of course I should have known this, since I wrote this in my earlier blog post
Sightseeing with London’s most iconic double-decker bus!
Don’t think about it. Then there’s line 15 with a “normal” double-decker. However, this one was so full that you could see little of the surroundings. Next time you can take this route on foot, because the route is very beautiful. You’ll pass through Fleet Street, where all the major newspapers used to be located. St. Paul’s Cathedral and some nice churches and buildings. 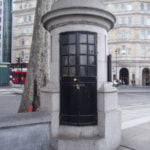 Arriving at Charing Cross Station, you can look around Trafalgar Square. Forgetting to take a look at the UK’s smallest police station. At the end of March, but in the repechage. Then on the right past the
National Gallery
strolled through St. Martins Place and Charing Cross Road. You’re passing here on St. Martin’s in the Field church, where in addition to church services, concerts are regularly held. Here you will also find the Cafe in the Crypt, a cafe in the crypt of the church.

Turn left at Irving Street towards Leicester Square where all the big cinemas are located and it’s always a busy place. A few more drinks on the terrace at The House of Mezze in Leicester Square. Just enjoy the sun.

Walked through Leicester Court and Newport Place to Gerard Street. This is the main street of China Town. China Town, where it is almost Chinese New Year and all the decorations already hang. A very colorful environment to look at. It’s really full of Chinese restaurants and shops. 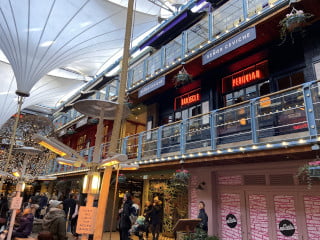 We continued our way through Shaftesbury Avenue and Regent Street. Regent Street is home to all the major flagship stores of all the major brands. At Beak Street, turn right to Soho. Just a look at the food court Kingley Court. We should just have a bite to eat next time. The most famous street of Soho is Carnaby Street, this is a nice shopping street with all kinds of shops and restaurants.

Since we also started to get hungry at Five Guys popped in for a hamburger. Five Guys is an American burger chain, where they keep everything very simple. You order which burger you want, make a choice of toppings and whether you want fries and soft drinks with you. When your order is ready you will get this in a paper bag, as you will get when you go through the Mc Drive. It doesn’t matter if you’re going to take it on the spot. But it was a very tasty burger.

Against my better knowledge, just go and check out Oxford Circus and Oxford Street. As is actually known, it is extremely busy here and there are no shops here that you will not find in other major cities. The hustle and bustle is making you crazy. So at the first opportunity only went into an inner street to escape the crowds.

We passed the White Swan Pub and got a drink. Nice pub and nice beer. I tasted a pint of London Pride here, very tasty. What I noticed was that the beer that comes out of the pump tap is not as cold as what we are used to. Little special beer temperature, just slightly colder than room temperature. 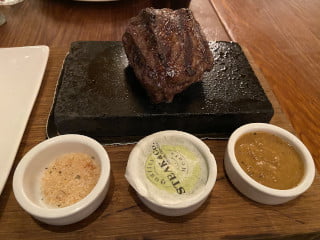 It was time to grab a bite to eat, as we had to get to the Royal Albert Hall in time for a cirque du soleil performance, Luzia. This was the main reason for this weekend. On the way we had Steak & Co.

Sitting on the corner of Irving Street and Charing Cross Road and since we are not averse to a good steak but take a break.

Steak & Co.
is a chain of steak restaurants, which serve their steaks on a hot stone. On this piping hot stone, fry your steak further as desired. Very nice and especially very nice to do. The quality of the steaks is good, definitely highly recommended. The downside is that it is very noisy and that they almost look you away, when you are eaten and still after enjoying your cup of coffee.

After dinner it was high time to go to the Royal Albert Hall. From Piccadilly Circus on the Piccadilly Line to South Kensington. We got out of the station on the wrong side and almost went the wrong way. When we found the right direction we walked past the Victoria & Albert Museum and the Science Museum to the Royal Albert Hall, which like many buildings are currently in the scaffolding. We were well on time, which is very important at Cirque du Soleil. When you are not on time or have to make a sanitary stop during the performance, they only let you back in at an appropriate time. You’ll miss part of the show.

“Luzia takes you to an imaginary Mexico, traverses jungles, deserts and urban environments, and incorporates an authentic tropical rain into the most spectacular acrobatics. There will also be visual surprises, including giant animals and mythological characters, in a show full of light and colour.”

To be honest, I never really got the story of which show I visited, but I love it. You’re short of eyes and ears. It’s a show of music, acrobatics and comedy. 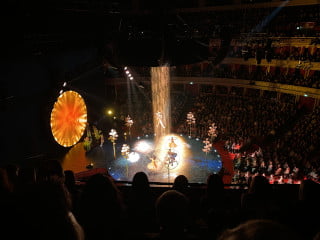 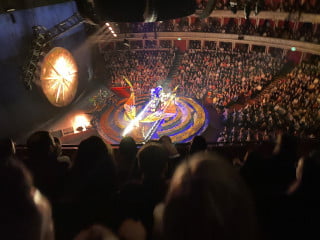 Our places were on the Circle R, the upper ring. In my view not the best places, it was a little too high. You look straight at the scaffold where all the acrobatic tools adhere. But overall you could see everything well.

My favorite places are Second Tier Box, which are private boxes for up to 6 people and you feel like you’re in a Muppet Show box just like Statler and Waldorf. But unfortunately, the last time I was here, I couldn’t get hold of these places.

After a great show just bought a program book and a DVD for the collection. It was time to go back to our hotel. Have a drink at the bar and then go to bed. 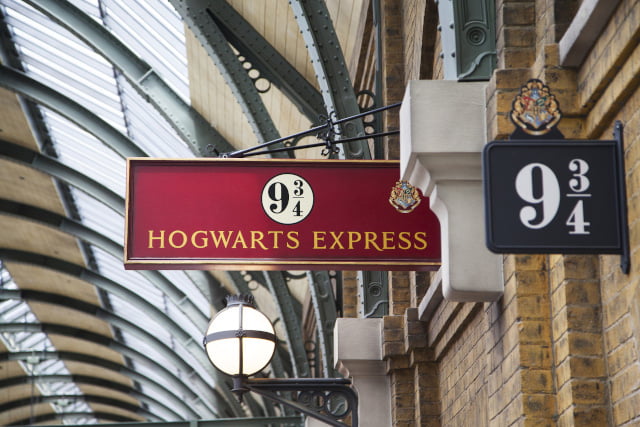 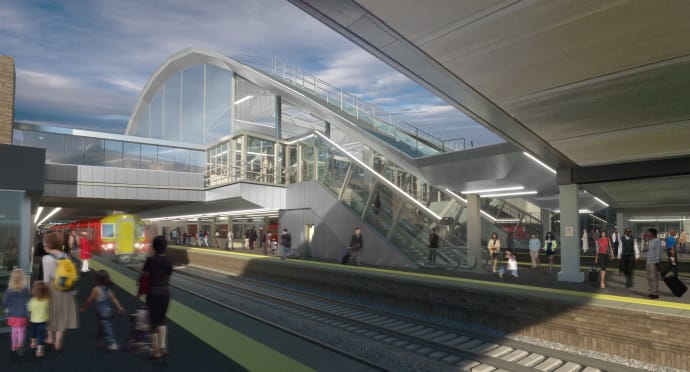 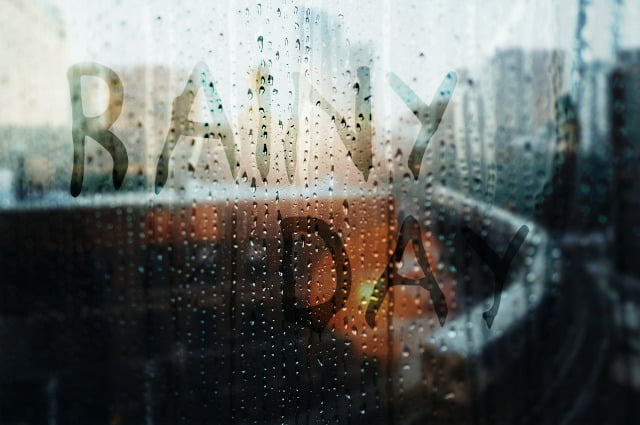